October 8th to October 17th, 1835 | Coordinates: 0.2620° S 90.7153° W
;
HMS Beagle did not stay on Santiago very long, but Darwin and a couple of his shipmates decided to stay behind on the island for nine days and camp there. It was the longest amount of time that Darwin would spend on any of the Galapagos Islands. Darwin collected many samples while on Santiago and hiked all the island observing the wildlife.

Use this key to help you read the map below, and explore Santiago!

Fascinating Fact: It took the Beagle a week to sail from Isabela to Santiago. Today boats can motor across over-night!

Fascinating Fact: A new species of land iguana that fascinated Darwin so much was recently found on Wolf Volcano on Isabela. It looks different from the other two species as it is partly pink!

What amazing species did Darwin encounter on Santiago? 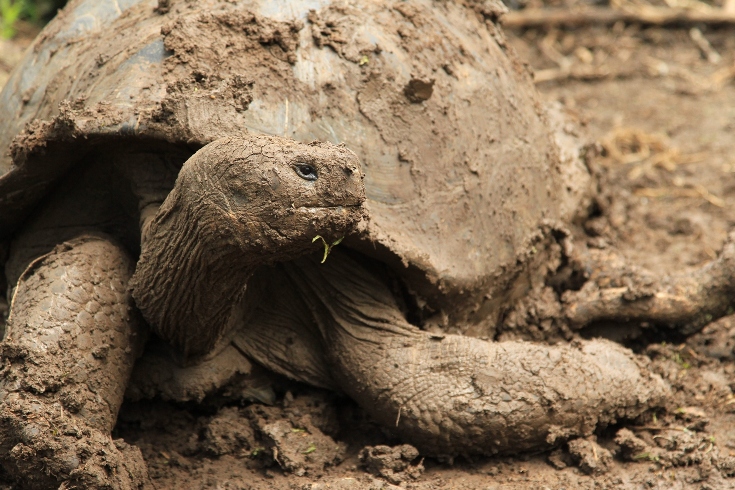 Land Iguanas
Darwin had not before witnessed land iguanas on the scale he saw them here. When they were setting up their camp, they found it difficult as the soil kept giving way because of the iguana burrows!
“I cannot give a more forcible proof of their numbers, than by stating that when we were left at James Island, we could not for some time find a spot free from their burrows on which to pitch our single tent.” (Voyage of the Beagle pg.399)

Darwin made many observations on the iguanas here –
“They often stop, and doze for a minute or two, with closed eyes and hind legs spread out on the parched soil.”

He watched how they used alternate sides of their body to dig their burrows, and when how one side was tired they would use the other. After watching one for a while he wrote, “I then walked up and pulled it by the tail; at this it was greatly astonished, and soon shuffled up to see what was the matter; and then stared me in the face, as much as to say, ‘What made you pull my tail?’”

Of other behaviours and appearance how they “try to look very fierce: but in reality they are not at all so; if one just stamps on the ground, down go their tails, and off they shuffle as quickly as they can.”

“Like their brothers the sea-kind, they are ugly animals, of a yellowish orange beneath, and of a brownish red colour above: from their low facial angle they have a singularly stupid appearance.”